Like no other, the Greek-Dutch composer Calliope Tsoupaki knows how to stop time. She touches people straight in the heart with her breathtaking music that spans centuries. During November Music 2019, she was allowed to realise a dream project. With her penetrating Bosch Requiem Liknon, she glued the listeners to their seats. This year there is a sequel…

In her Memento Nostri, Calliope intertwines Latin and Byzantine texts. A brand new mass that connects traditions like a universal meta-requirement, Tsoupaki reveals. For Tsoupaki’s requiem, the choir is accompanied by a special ensemble, Consort Company: a quartet of viola da gambas conducted by Mieneke van der Velden joins forces with a recorder quartet led by Daniël Brüggen. In Tsoupaki’s new mass, it all comes together. The warmth of the choir sound, the mercurial sound of a collection of viola da gambas, combined with the clarity of a recorder ensemble.

Calliope is one of the defining composers of Dutch musical life, she has lived in the Netherlands since 1988 and is a composition teacher at the Royal Conservatory in The Hague. Her aim is to express the essence as simply and clearly as possible. In her compositions, she uses elements from ancient and contemporary music and the music of Greece and the Middle East. She skilfully combines them into a musical idiom that is entirely her own. Her music is praised for its melodic character, warm sound and emotional quality. To date, her oeuvre comprises more than 100 works for various instrumentations and instruments from different cultures (qanun, ney, kemençe, hurdy gurdy, vielle, viola da gamba) from solo to orchestral works, choral music, dance, theatre, opera and multi-sensory projects.

At the request of Anthony Zielhorst, conductor of chamber choir Ad Parnassum Tilburg, and with support from the Performing Arts Fund, Calliope Tsoupaki has composed the Requiem composition MEMENTO NOSTRI (2020), which was originally intended to be premiered during Requiem in Koningshoeven in November 2020. This performance could not take place due to the pandemic, so the upcoming performances will bring the world premiere. Tsoupaki’s combination of instruments (choir accompanied by recorders and viola da gambas) was frequently used by many composers in the 17th century, because the sound of both ensembles can melt together beautifully without losing its individuality. 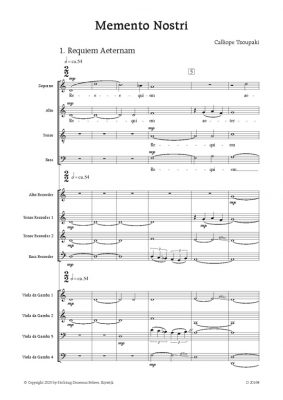 Memento Nostri consists of two parts. The first part, Requiem Aeternam, is a musical elaboration of the opening section of the funeral liturgy. The texts of the entrance song and the prayer for mercy are combined with a fragment from the Tractus Absolve Domine and a fragment from Psalm 23, which occurs in the Greek Orthodox funeral liturgy. The music is melodious in a broad gesture. We enter the room where we pay our respects to the deceased and sing of his eternal peace. This first part consists of a fine alternation between choir and consorts and concludes with a moving Lamento by the sopranogamba. Calliope Tsoupaki wrote this Lamento for Mieneke van der Velden, who leads the gamba consort. Lamento is followed by a passage in which God is invoked to hear our plea for mercy, both in Latin and in Greek. The sound becomes fuller, the movement fiercer. God’s mercy must not only concern this deceased person, but all the deceased. A sharp fragment of the recorder consort underlines this statement; our prayer continues endlessly.

The second part, entitled Memento Nostri, consists of four sections. The first section Os anthos marenete opens with a meditative overture by the gamba consort, which is later joined by the recorder consort. The music is polyphonic: the theme introduced by the sopranogamba is imitated in the other instruments. This theme, which in the opening seems to refer to the great hymn Te Deum laudamus, forms the leitmotiv of this part of the composition. We hear it return in various forms in alternation with the choir. Contrasting with this is a passage of fast notes that ‘flies’ through both consorts and appears as a second theme in the dialogue with the choir. In the meantime, the choir sings fragments from the Greek Orthodox Troparia of St. John Damascene, the Chrysorrhoas: carried, tuneful and painful.

The liturgy continues with a grand homophonic Sanctus, which Calliope Tsoupaki has set up as a chorale. Here too, Latin is alternated with Greek passages. ‘Sanctus, sanctus, sanctus’ becomes ‘Agios, agios, agios’. The Agnus Dei is designed as a lament, a Threnos. The supplication becomes personal: give them eternal rest.

Memento Nostri concludes with a prayer for God’s protection not only for the deceased, but for us all: Memento nostri Domine, miserere nobis. Because the prayer is sung completely a cappella and increases in intensity, it forms an impressive conclusion to a monumental composition.

The work is dedicated In memoriam Louis Andriessen, Calliope’s teacher who passed away this summer.

Click here for the performance on the 7th of november

At “Jheronimus Bosch Art Center” being a part of the most festive edition of November Music Festival 2021 together with a very special performance of “Thin Air” by Claire Adams.

Click here for the performance on the 10th of november