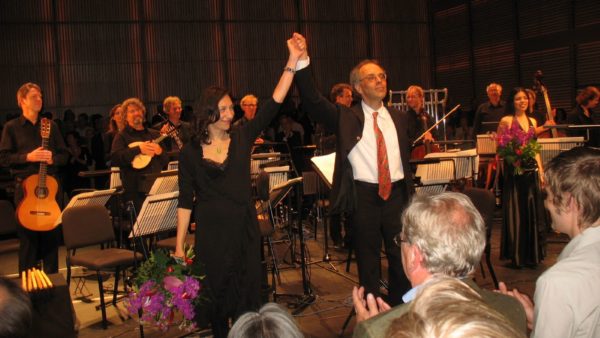 “The Greek Tsoupaki with her surprising melodies joins in the actual need for sublimation.
…. The fusion between antique and new and western and exotic sound-worlds give to the Lucas Passion a position that reduces the work of her neospiritual colleagues simply to narrow-minded constructions”

“Calliope Tsoupaki composed the Jesus role for the voice and abilities of the tenor Marcel Beekman, who experienced his finest hour during the premiere. Often very high and penetrating he sang his words aiming directly at the soul of the audience. ….
At the end came one of the most moving moments: a long silent lament on the ney, a simple wooden shepherd’s flute.”

“Calliope Tsoupaki with her Lucas Pasion is striving for silence and intimacy….
The transparent and well mastered instrumental writing gave to the singers immense space.The tenor Marcel Beekman interpreted the role of Jesus in a calm and expressive way….”

“I did not want to compose a passion that everyone expects…..”

“An icoon as inspiration.
The Lucas Passion of the composer Calliope Tsoupaki is more relevant to Monteverdi than Bach.”

“More powerful than the Matthäus. The Greek-Dutch composer Calliope Tsoupaki writes her own “Lucas Passion”. The tone is not pathetic but light and direct…”

“Byzantine and Gregorian chant melt together with rock and minimal music…”

“Question: How would you describe your music?
Calliope Tsoupaki: As a fusion of western, medieval and Byzantine music. But mainly as music that is looking for closeness.”

“With Lucas Passion I went back in the time of the 6th century when in Rome the Gregorian and Byzantine chant were melting together in a fascinating musical idiom. The echo of that kind of music sounds in my Passion…”