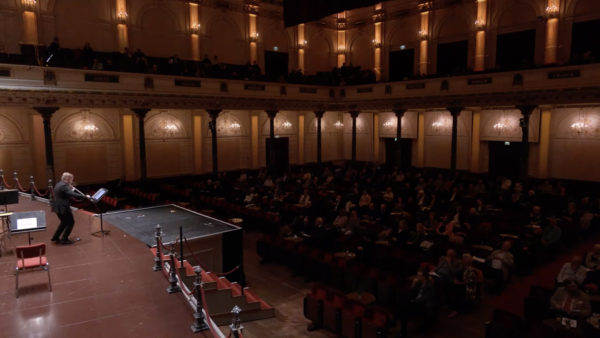 Calliope Tsoupaki’s new piece Thin Air is performed in dozens of festivals worldwide, in prominent venues like Amsterdam’s Concertgebouw. But it is also played or scheduled for performance in New Zealand, Russia, New York and Teheran.  Calliope was commissioned to write Thin Air by Festivals for Compassion. It is an initiative by Tamar Brüggemann, the director of the Dutch festival Wonderfeel. She wanted to pay tribute to the compassion that we show during the corona crisis and asked other festivals to join. May of them gladly agreed. In each festival one soloist or duo performs Calliope‘s new piece, that can be played on a wide range of instruments.

Tsoupaki: “At the beginning of the corona crisis we had to make quick decisions. We decided to shut down the economy in order to protect the weakest. An impressive example of compassion. For Festivals of Compassion, I have now written a piece that every musician can play on any instrument, just as everyone can express their inner voice of compassion in their own way”. The guitar player Wiek Hijmans premiered Thin Air on June 20th during Holland Festival. Each performance will be filmed and shared on www.festivalsforcompassion.com.

All musicians, professionals and amateurs, can download the score for free from www.componistdesvaderlands.nl.

Watch a compilation of all performances in 2020: